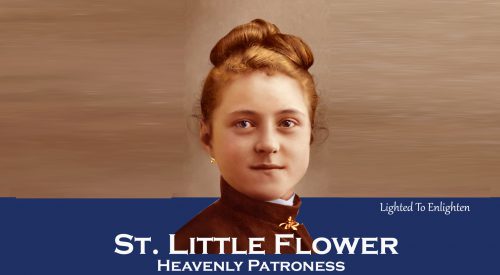 The Greatest Saint of the Modern World, St. Little Flower, was born on January 2, 1873, in Alencon, France. From the very beginning of her life, she had an ardent desire to become a Carmelite nun, and overcoming various obstacles, in 1888 at the early age of 15 joined the cloistered Carmelite community of Lisieux, Normandy. After having led a calm and silent life in the cloisters of the Carmelite convent for nine years, she died of tuberculosis at the age of 24 on 30th September 1897. Therese lived a hidden life and wanted to be unknown, yet became popular after her death through her spiritual autobiography The Story of the Soul. She was canonized by Pope Pius XI in 1925 and was declared as the Doctor of the Church in 1997 by Pope John Paul II. The depth of her spirituality reflects in her life of childlike surrender and trust in God has inspired many believers. In the face of her littleness and nothingness, she trusted in God to be her protector.